Год выхода: 1990
Выпущено: Legend Video
Жанр: Classic
В ролях: Jasmin Rhodes, K.C. Williams, Alice Springs, Danielle Rodgers, Peter North, Randy West, Randy Spears
Welcome to Oakwood Asylum where Randy Spears has just hired on as a new doctor...and who should he meet first but one of the resident nymphomaniacs. He watches as she makes it with fellow patient Randy West. Surprise: everybody at Oakwood is a "sex addict," from rich bitch Danielle Rogers to former patient, now a nurse, Alice Springs. Watch for Springs" superhot girl/girl number that turns into a threesome near the beginning (Love those Aussie accents!) If you're thinking by now that it's hard to tell the patients from the doctors, how right you are! There are certainly some outstanding performances in this video, particularly by star Danielle Rogers, who it turns out, is crazy like a fox. It's worth the price of this tape just for her. 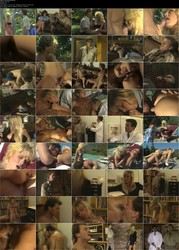