Год выхода: 2014
Выпущено: Marc Dorcel
Жанр: Anal, Feature
В ролях: Alexis Crystal, Ferrera Gomez, lola, Lola Reve, Yanick Shaft, Mike Angelo, Thomas Stone
Lola, a beautiful young woman from a good family, is on the verge of a unique experience that will change her sexuality forever.
Imprisoned in a high-security zone in Eastern Europe with other candidates, she chose to spend three days and nights as a prisoner: walls, cells, bars, uniforms, body searches... everything is true to life! Totally at the mercy of a particularly vicious and authoritarian female supervisor, the group will quickly learn what it means to be completely subjected to pleasure.
While a man is forced to watch his wife being fucked and raped by another inmate, Lola is at the mercy of four virile males who have been incarcerated for several months and are terribly excited by her gorgeous body. In the precincts of PRISON BLOCK 69, inmates are now only sex objects, serving the sick fantasies of their guards..
In a place where even the wildest perversions are permitted, the inmates will have no choice but to go further than they've ever gone before. 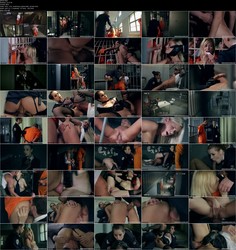